Fortran ‘Must Knows’ for Writing Subroutines in Abaqus (PART II)

In the last blog post, Fortran ‘Must Knows’ for Writing Subroutines in Abaqus (PART I), we review some of the Fortran basics vital for us to write an Abaqus subroutine. We have also talked about different Fortran Data Types, including Numerical, Non-numerical Variables, and Arrays. Here, we will discuss the remaining topics such as Operators and Expressions (for Variables and Matrices), Conditional (IF) and Loop (DO) Statements, some Build-in Functions in Fortran, and finally, a brief talk about How to Write to files from inside Fortran.

The simplest non-constant expressions are of the form:

The result of an expression is itself an operand; hence we can nest expressions together. 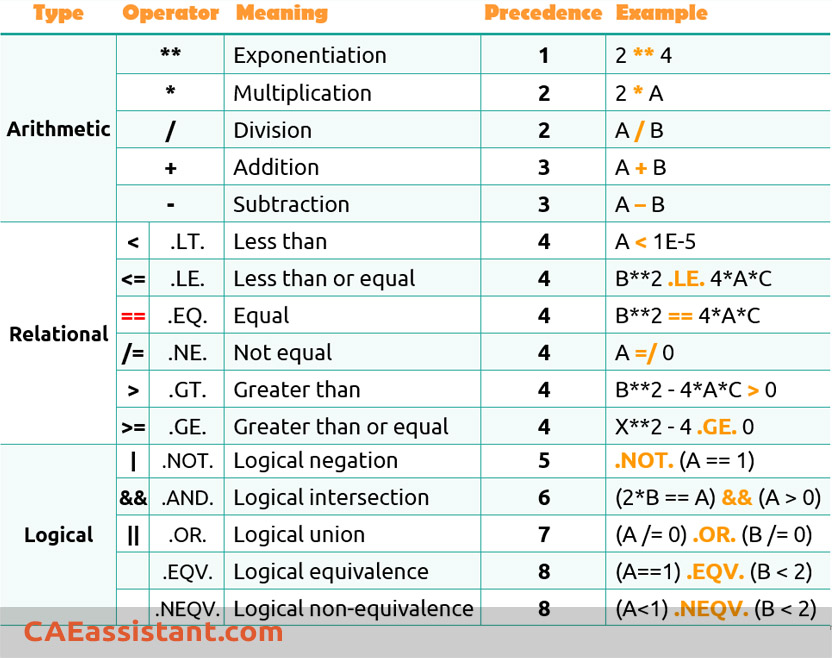 The most common conditional statement in Fortran is the IF statement, which has several forms:

I. One-line (one executable statement)

II. More than one executable statement

The conditional expressions are evaluated in a row until one is found to be true. Then the associated statements are executed, and the control resumes after the endif.

For repeated execution of similar things, loops are used. Here we only take a look at DO-loop in Fortran.

This loop repeats a series of one or more Fortran statements a set number of times. The general format is:

count_variable  is the loop variable (often called the ‘loop index’ or ‘counter’).

Where the count_variable must be an integer variable. start, stop, and step are integer variables or integer expressions. The step value is optional. If it is omitted, the default value is 1.

Also, another general form of the DO loop that you may see is as follows:

Here is a simple example that prints the cumulative sums of the integers from 1 through N (assume N has been assigned a value elsewhere):

The number 10 is a statement label.  Recall that column positions 1-5 are reserved for statement labels and the numerical value of statement labels has no significance (see the explanation of Statement Label and Column Position Rules in the first part of this post: Fortran ‘Must Knows’ for Writing Subroutines in Abaqus (PART I))

The variable defined in the DO-statement is incremented by 1 by default. However, you can define the step to be any number but zero. This program segment prints the even numbers between 1 and 10 in decreasing order:

Some useful functions have been included in Fortran. For example, most of the practical mathematical functions:

Fortran operates on vectors and matrices much like Matlab:

U and V can be vectors, so you do not have to calculate such statements member by member (in a loop).

Which is of great importance in FEA. Note that:

is NOT a matrix multiplication. However, it will multiply the elements of A and B to create C.

Compute a general dot product that is particularly useful in Abaqus subroutines.

6.4. Dimension of Vectors and Matrices

Returns LENGTH as a single integer (2, 3, 6, …) to determine the length of a vector_array.

In Fortran, the general syntax to write a file is:

The unit number is an integer-valued variable that is defined when opening the file.

format string describes how the output is to be formatted  (This is something like %s or %d in MATLAB or C).

For debugging purposes in your Abaqus subroutines, you can write to the default (unit number=6), which is the Printed Output file:

In Fortran, * means default. So, this will simply use standard defaults to print integers, double precision numbers, etc.

With the above statement, the values held by num1 and num2 variables can be displayed. The information inside the quotes is shown as it is, including capitalization and any spelling errors. When you do not use the quotes, it is interpreted as a variable.

Default formatting is OK for printing a few variables but not much good for printing an array, which will be largely incomprehensible. The format string is a character string that has a special meaning for Fortran, for example:

For a handy reference of these format codes, you can see the Format Statements in Stanford Fortran Tutorial.

Tags:
ABAQUS, DO, Fortran, IF, Subroutine, UMAT
Back to list
Older Fortran ‘Must Knows’ for Writing Subroutines in Abaqus (PART I)

Fortran ‘Must Knows’ for Writing Subroutines in Abaqus (PART I)

In Abaqus, user subroutines are primarily written in Fortran, although developing your code in C or C++ is also possible. If ...

END_OF_DOCUMENT_TOKEN_TO_BE_REPLACED

Start Writing Your 1st UMAT for Abaqus (PART A: Foundation)

Here our focus is on UMAT, an advanced subroutine we use to include desired material behavior in simulations. However, the use of this ...

END_OF_DOCUMENT_TOKEN_TO_BE_REPLACED

Start Writing a Subroutine in Abaqus: Basics and Recommendations

The user subroutines in Abaqus allow the program to be customized for particular applications, which are not available through main Aba...

END_OF_DOCUMENT_TOKEN_TO_BE_REPLACED

Sometimes you may need to run several analyses on your Abaqus model. Therefore, you may change some parameters and create diffe...

END_OF_DOCUMENT_TOKEN_TO_BE_REPLACED

Speeding Up Quasi-static Analysis in Abaqus/Explicit (1)

Part 1: Increasing Load Rates We previously discussed differences of Abaqus/Standard and Abaqus/explicit in the article Abaqus/Standa...

END_OF_DOCUMENT_TOKEN_TO_BE_REPLACED

What is damping? Damping is an influence within or upon a dynamic system that has the effect of reducing, restricting or preventing it...

END_OF_DOCUMENT_TOKEN_TO_BE_REPLACED

When modeling concrete, in most situation you probably need to define steel reinforcement to follow tensional behaviour of th...

END_OF_DOCUMENT_TOKEN_TO_BE_REPLACED

As you know, we need to link Abaqus and Intel Fortran to execute user subroutines such as VUMAT, UMAT, USDFLD, etc. You can link variou...

END_OF_DOCUMENT_TOKEN_TO_BE_REPLACED

Generally, if we put aside CFD solver (Abaqus/CFD) that is used for fluid problems, the heart of Abaqus is the analysis modules, Abaqus...

END_OF_DOCUMENT_TOKEN_TO_BE_REPLACED

This example simulates failure and damage in a FML containing a blunt notch subjected to quasi-static loading conditions....

END_OF_DOCUMENT_TOKEN_TO_BE_REPLACED

subscribe to our newsletter so we can send you offers, discounts, and articles.
Shopping cart
close
Sidebar