For every beginner user, it is really strange why quantities in Abaqus have no units. They get confused about the stress unit or when inputting parameters like Young Modulus, density… Read this post to know how Abaqus units would be and see the Abaqus units table at the end.
Not only Abaqus but almost any finite element programs (Ansys, LS-Dyna…) do not consider the units of given quantities. It is the user’s responsibility to ensure that the given numbers have consistent units.

Abaqus has no units built into it except for rotation and angle measures. Therefore, the units chosen must be self-consistent, which means that derived units of the chosen system can be expressed in terms of the fundamental units without conversion factors. Read this useful article in 4 minutes to get enough information about Abaqus units or units in Abaqus.

Generally, any consistent system of units consists of some fundamental units such as Length (L), Mass (M) or Force (F), and Time (T) as base units and the other units are named derived units, which are formed by powers, products, or quotients of the base units and are potentially unlimited in number.

The International System of Units (SI) is an example of a self-consistent set of units. The fundamental units in the SI system are length in meters (m), mass in kilograms (kg), time in seconds (s), the temperature in degrees Kelvin (K), and electric current in Amperes (A).
Combinations of base and derived units may be used to express other derived units. The definition of derived units is based on fundamental physical relations:

For example, A unit of force in the SI system is called a Newton (N):

Another example is the unit of energy called a Joule (J):

Sometimes the standard units are not convenient to work with. For example, Young’s modulus is frequently specified in terms of MegaPascals (MPa) (or, equivalently, N/mm2), where 1 Pascal = 1 N/m2. In this case, the fundamental units could be tonnes (1 tonne = 1000 kilograms), millimeters, and seconds.

There are numerous different sets of units that can be used when performing FE simulations. The best set of units will depend on the problem; typically, the most accurate results are obtained if the units are chosen such that the values of the input quantities to the FE simulation are close to unity. By having the input quantities close to 1, the influence of round-off errors and truncation errors are reduced.

Let us see a practical example for choosing appropriate Abaqus units:
We have modeled a fullerene C60 in Abaqus and applied forces (distributed) to its ends (like a tension test). C60 has dimensions in the order of nm (1e-9 m). Our forces are also in nN.
E=1.16 Tera-Pascal = 1.16 e+12 Pa
How we can model this geometry in Abaqus?
What is the Young Modulus unit? What is the mass density unit? 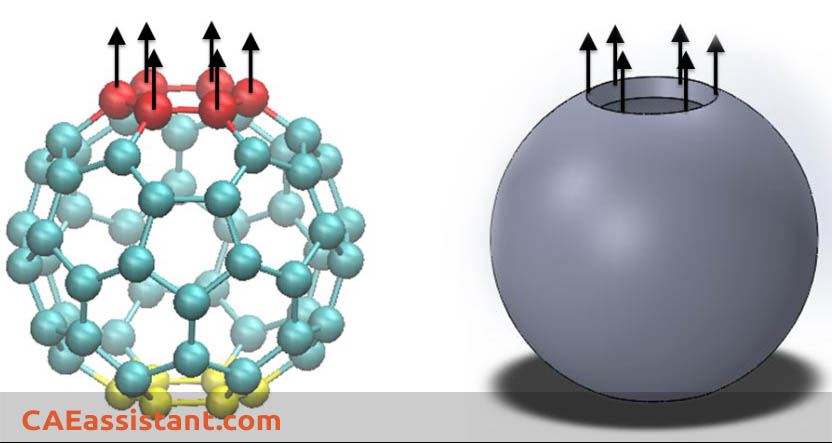 Modeling sub-micron quantities is not possible in Abaqus/CAE since geometric limits are set. It means that you cannot model a sphere of radius 1e-9 in Abaqus/CAE. Besides, if it was possible, due to the influence of round-off errors and truncation errors for very small values, the analysis would stop soon. 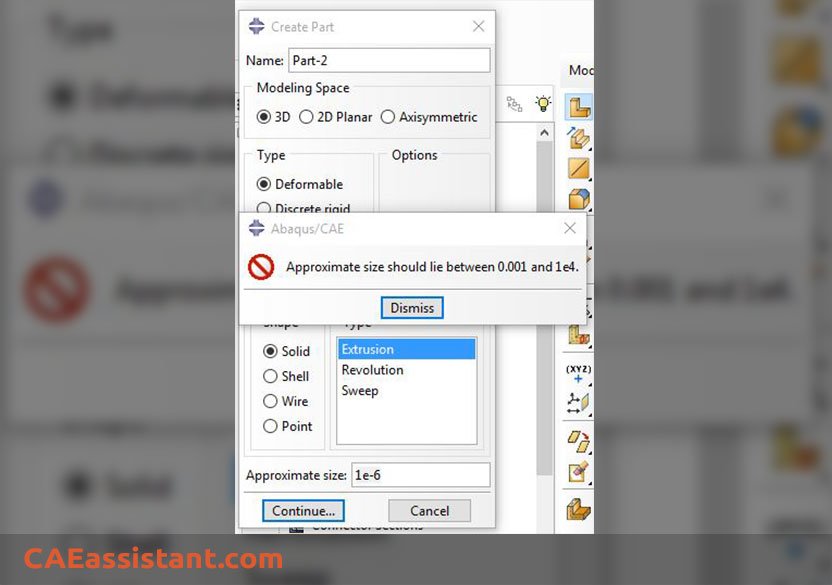 Therefore, we need to scale down the model and make the necessary changes in the material properties.
Remember the base units in SI: FLT=Force, Length and Time
For example, we select nN as force base unit, nm as length unit and s as time unit.
It means we will make our geometry saying all dimensions in nm.
Now, for Young Modulus, which is a kind of stress, we have:

We enter 1.16 e+3 as Young Modulus in Abaqus.
Remember that you are doing a numerical calculation in Abaqus, and 3 mm and .003 m are different for a computer; it needs more memory to save and do calculations on .003 than 3.

The following table provides examples of consistent systems of units. As points of reference, the mass density and Young’s Modulus of steel are provided in each system of units. “GRAVITY” is the gravitational acceleration. Abaqus units table: 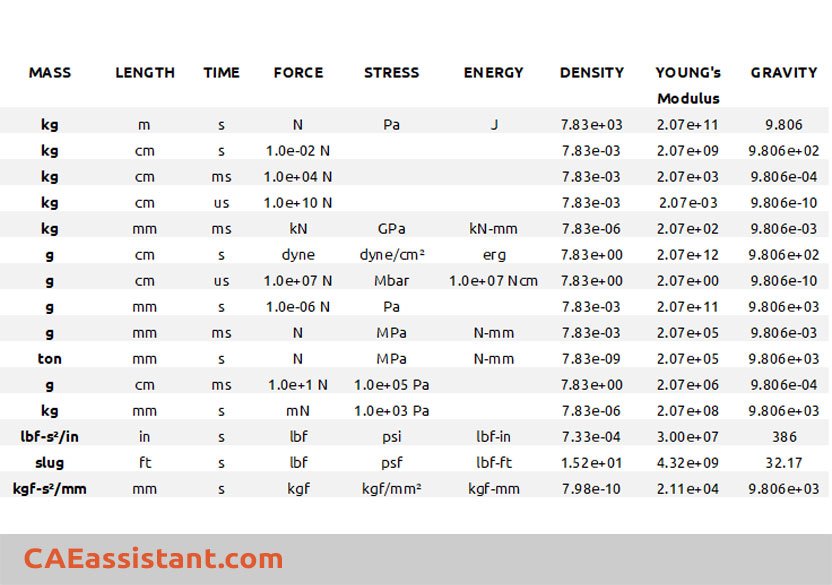 The naming conventions are not as clear as in the SI system for imperial (American or English) units and they can cause confusion. Frequently, it is not made clear in handbooks whether lb stands for lbm or lbf. You need to check that the values used to make up a consistent set of units.

For example, 1 pound-force (lbf) will give one pound-mass (lbm) an acceleration of g ft/sec2, where g is the value of acceleration due to gravity. If we take pounds-force, feet (ft), and seconds as fundamental units, the derived unit of mass is lbf sec2/ft. Since density is commonly given in handbooks as lbm/in3, it must be converted to lbf sec2/ft4 by

Two other units that cause difficulty are the slug, the mass that will accelerate at 1 ft/sec^2 by 1 lbf, and the poundal, which we define it as the force required to accelerate 1 lbm at 1 ft/sec2. Useful conversions are
1 slug = g x lbm
and
1 lbf = g x poundals
where g is the magnitude of the acceleration due to gravity in ft/sec2.

How can I simulate in Abaqus correctly? Is there any tutorial?

Here below, I have listed some main Abaqus Tutorials that you may use when simulating an Abaqus project at an advanced level as a graduate student or researcher. Good news for you! You can learn what you want by clicking on that.

I hope you got enough information about Abaqus units and how to calculate Abaqus consistent units. In below video, you can see the part of this tutorial related to the system of units in Abaqus.

How can we convert the SI units for specific heat capacity (J/kg-K) and Thermal Conductivity (W/m-K) into consistent units when we model the geometry in mm? In other words, what is the conversion factor for these quantities when we model in mm?

Finally, It would be useful to see Abaqus Documentation to understand how it would be hard to start an Abaqus simulation without any Abaqus tutorial.

One thought on “Units in Abaqus | Abaqus units”