As you know, in general, a finite-element problem is written as:

Where F, K, and x are the vector of nodal load, stiffness matrix, and nodal displacement vector, respectively.

Then a positive-definite system matrix K will be non singular and satisfy if:

For all nonzero x. Thus, when the system matrix is positive definite, any displacement that the model experiences will produce positive strain energy.

Abaqus negative eigenvalues messages are generated during the solution process when the system matrix is being decomposed. Physically, negative eigenvalue messages are often associated with a loss of stiffness or solution uniqueness in the form of either material instability or the application of loading beyond a bifurcation point (possibly caused by a modeling error). During the iteration process, the stiffness matrix can then be assembled in a state which is far from equilibrium, which can cause the warnings to be issued.

In practice, the messages can be issued for a variety of reasons, some associated with the physics of the model and others associated with numerical issues. The Abaqus message itself shows some origins of this warning: 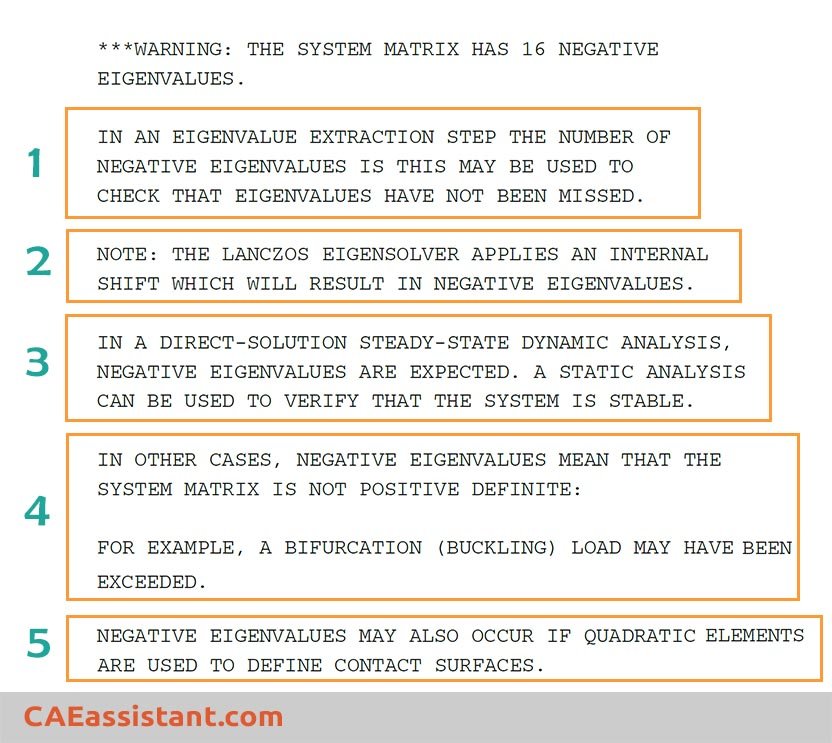 In addition to the causes shown in the warning message, some situations in which negative eigenvalues messages can appear include:

1. Buckling analyses in which the pre-buckling response is not stiff and linear elastic.

In this case, the negative eigenvalues often point to not-real modes. Remember that the formulation of the buckling problem is predicated on the response of the structure is stiff and linear elastic prior to buckling.

3. The use of anisotropic elasticity with shear moduli that are unrealistically very much lower than the direct moduli. In this case, ill-conditioning may occur, triggering negative eigenvalues during shearing deformation.

4. A non-positive-definite shell section stiffness is defined in a UGENS routine.

5. The use of a pretension node that is not controlled by using the *BOUNDARY option and lack of kinematic constraint of the components of the structure. In this case, the structure could fall apart due to the presence of rigid body modes. The warning messages that result may include one related to negative eigenvalues.

6. Some applications of hydrostatic fluid elements.

You must log in to read the rest of this article. Please log in or register as a user.

Forgotten username or password?
Newer Units in Abaqus | Abaqus units
Back to list
Older Finding Reaction Force on a Body