Speeding Up Quasi-static Analysis in Abaqus/Explicit

Quasi-static analysis in Abaqus/explicit and its related methods to increase solving speed, like load rate scaling or mass scaling, are fully described in this post. Follow me to start speeding up our CAE analysis step by step.

In addition, you can see this Q&A to have a sense of how we decide whether an analysis is quasi-static (static) or not:
How can I know if my simulation is quasi-static or not?

Quasi-static problems are one of those that usually would be solved with Abaqus/Standard but may have difficulty converging because of contact or material complexities, resulting in a large number of iterations. Challenging nonlinear quasi-static problems often involve:

** Very large deformations that can lead to severe mesh distortion.

For example, typically, in metal forming analysis, we face such difficulties: 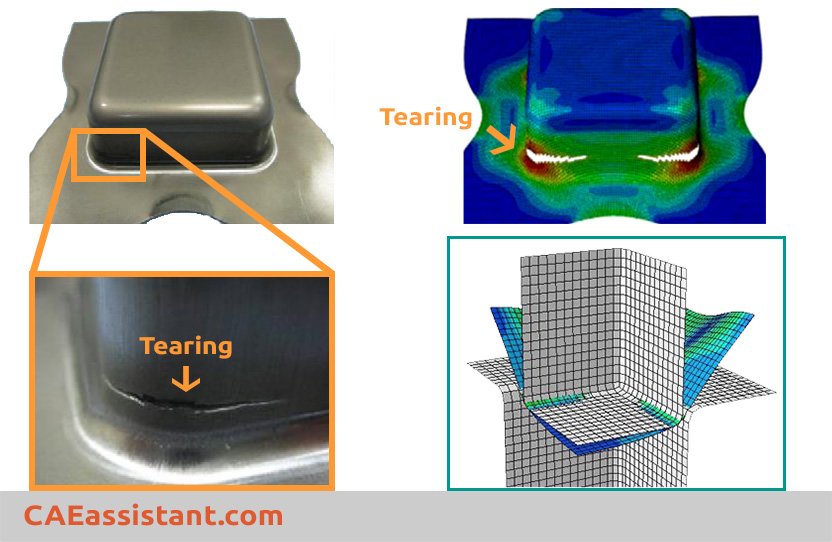 Example: Simulation of tearing in a deep drawing process
It is really hard to model such a problem with Abaqus/Standard.

Application of Abaqus/Explicit to model quasi-static events requires special consideration. It is computationally impractical to model the process in its natural time period. Literally, millions of time increments would be required. Therefore, we artificially increase the speed of the process in the simulation to obtain an economical solution.

In this article, our focus is on the increased load rates approach. Mass scaling will discuss in detail later.

To reduce the number of increments required in an Abaqus/Explicit analysis, we can speed up the simulation compared to the time of the actual process—that is, we can artificially reduce the time period of the event or, equally, increase the rate of loading. This will introduce possible errors. If the loading rate is increased too much, the increased inertia forces will change the predicted response. In an extreme case the problem will exhibit wave propagation response. The only way to avoid this error is to choose a load rate that is not too large.

How to find out if a load rate is appropriate or not?

»Excessive loading rates can cause highly localized deformation near the applied load.

»Excessive loading rates in a quasi-static collapse analysis can result in a steep initial slope of the load versus displacement curve due to increased (non-structural) resistance to initial deformation. Sometimes, localized buckling may occur near the applied load.

The dominant response of a quasi-static analysis will be the first structural mode. Therefore, we use the frequency of this mode to estimate the proper load rate Abaqus:

To illustrate the problem of determining the proper loading rate, consider the deformation of a side intrusion beam in a car door. The actual test is quasi-static.

We model the test as the circular beam (length of l, diameter of d and thickness of t) is fixed at each end, and a rigid cylinder (diameter of D) deforms the beam.

Here we check the velocity of 20 m/s and 400 m/s for a cylinder to see which one can be applicable to our problem.

If we check the velocity of 400 m/s it will result in about 4% of wave speed (unacceptable).

ii. Some aspects of the problem other than inertia forces—for example, material behavior—may also be rate-dependent. In this case, the actual time period of the event being modeled cannot be changed. The mass scaling approach gets attractive in such problems.

We could obtain a more accurate quasi-static solution by applying loads gradually.

By default, Abaqus/Explicit loads are applied immediately and remain constant throughout the step. Instantaneous loading may induce the propagation of a stress wave through the model, producing undesired results. For instance, constant velocity boundary conditions result in a sudden impact load onto a deformable body.

We can ramp up (or down) the loading gradually from (to) zero by defining a smooth step amplitude in Abaqus: 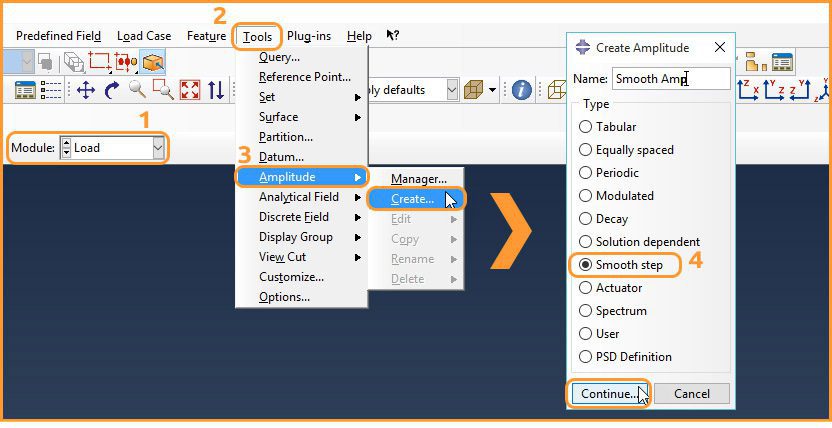 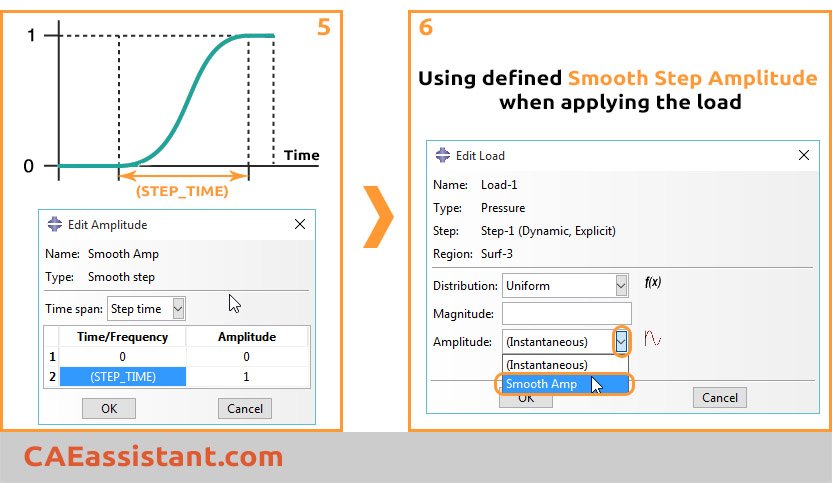 It would be useful to see Abaqus Documentation to understand how it would be hard to start an Abaqus simulation without any Abaqus tutorial. If you want to get complete information about load rate scaling and mass scaling methods, watch the below demo video of the Abaqus course for beginners package:

1. Abaqus/standard is not appropriate for metal forming simulation at all. (True/False)

2. Stretching is one of the bulk metal forming processes in which Abaqus/explicit is more efficient to simulate. (True/False)

3. We artificially increase the time scale of the process by increasing the loading rate. (True/False)

4. Jetting is a hydrodynamic-type response when tool speed in bulk forming simulations is excessive happens. (True/False)

7. By default, Abaqus/Explicit apply loads gradually throughout the step.

Try to model intrusion tests based on the information provided about geometry, material, etc. First, conduct a Frequency analysis to find the basic frequency (first mode) of the beam (with given BC). Then run three Dynamic, Explicit analyses (as shown in the poster of the article) and compare results.

2 thoughts on “Speeding Up Quasi-static Analysis in Abaqus/Explicit”