Generally, if we put aside CFD solver (Abaqus/CFD) that is used for fluid problems, the heart of Abaqus is the analysis modules, Abaqus /Standard and Abaqus /Explicit.

Explicit And Implicit Solvers in Abaqus

These solvers are based on two approaches in FEM analysis, namely implicit (for Abaqus/Standard) and explicit. The distinction between the two different numerical approaches, makes it possible to understand which solver to use.

In the case of the implicit method, equilibrium is enforced between externally applied load and internally generated reaction forces at every solution step (Newton Raphson method).
In the case of the explicit method, there is no enforcement of equilibrium. But this does not mean that explicit is not accurate. You can minimize its deviation from equilibrium to almost zero by increasing the number of solution steps, i.e. reducing the time step size.
We can list the main differences below:
Implicit is unconditionally stable.
Implicit schema is incremental as well as iterative. However, explicit schema is only incremental.
In terms of cost per Increment, it is costly for implicit and cheaper for explicit. Disk space and memory usage are typically much smaller than that for implicit. The explicit method shows great cost savings over the implicit method as the model size increases:

Therefore, Abaqus/Standard must iterate to determine the solution to a nonlinear problem but Abaqus/Explicit determines the solution without iterating by explicitly advancing the kinematic state from the previous increment.

Explicit or Standard, Which one I use?

For many analyses, it is clear whether Abaqus/Standard or Abaqus/Explicit should be used. For example, Abaqus/Standard is more efficient for solving smooth nonlinear problems; on the other hand, Abaqus/Explicit is the clear choice for high-speed dynamic analyses such as crash analysis or drop test. There are, however, certain problems that can be simulated well with either program.

Typically, these are problems that usually Abaqus/Standard can solve but may have difficulty converging because of contact or material complexities, resulting in a large number of iterations. For example, in problems where very complex contact conditions or very large deformations are present. Such analyses are expensive in Abaqus/Standard because each iteration requires solving a large set of linear equations. 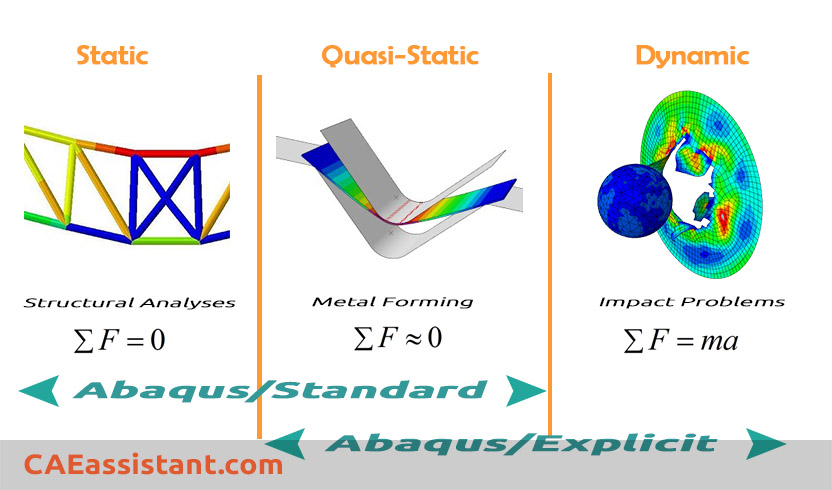 In the below video, see the complete comparison between Abaqus standard solver and the explicit solver:

2 thoughts on “ABAQUS/Standard or ABAQUS/Explicit?”