Damping is an influence within or upon a dynamic system that has the effect of reducing, restricting or preventing its movements. In physical systems, damping is produced by processes that dissipate the energy. Damping forces come from several sources simultaneously, such as energy loss during hysteretic loading, viscoelastic material properties, contact friction and so on.

You can find a great blog about the concept and basic understanding here:

Generally, we can have damping resulted from:

Why we use damping in Abaqus?

We take profit of damping in Abaqus to accurately models the energy loss in a dynamic system. Damping is also beneficial when modeling very fast phenomenon and noisy dynamics. It will play a critical role to have a meaningful solution.

So, there are two main reasons for adding damping to a model: to limit numerical oscillations or to add physical damping to the system.

How we can model damping in Abaqus?

Two primary aspects for defining damping are available in Abaqus:

How we can enter data for damping in Abaqus?

In general, Abaqus has five categories of damping definition sources:

You specify damping when defining material.

Assumes the damping coefficient is constant in all materials. It is essentially a crude approximation to improve performance (preliminary design).

Applies only to mode-based linear dynamic analyses, so it can only be used in Abaqus/Standard.

Here, we only focus on material damping in Abaqus. Other types will discuss later in future articles.

In most cases, the material model itself may provide damping in the form of plastic dissipation or viscoelasticity. For many applications such damping may be adequate. Another option is to use Rayleigh damping or structural damping.

In Abaqus, material damping can be defined for both direct-integration (nonlinear, implicit or explicit) and mode-based (linear) dynamic analyses.

Some models do not have any dissipation sources (an example is a linear system with chattering contact, such as a pipeline in a seismic event). In such cases it is often desirable to introduce some general damping. Abaqus provides Rayleigh damping for this purpose. It provides a convenient abstraction to damp lower (mass-dependent) and higher (stiffness-dependent) frequency range behavior.

In Rayleigh model, damping is linearly proportional to mass M and stiffness K matrices. A damping matrix C is added to the system. We define C as:

C matrices are generated for each material in the model. We define the Rayleigh damping factors (alpha, beta) as material properties in Abaqus: 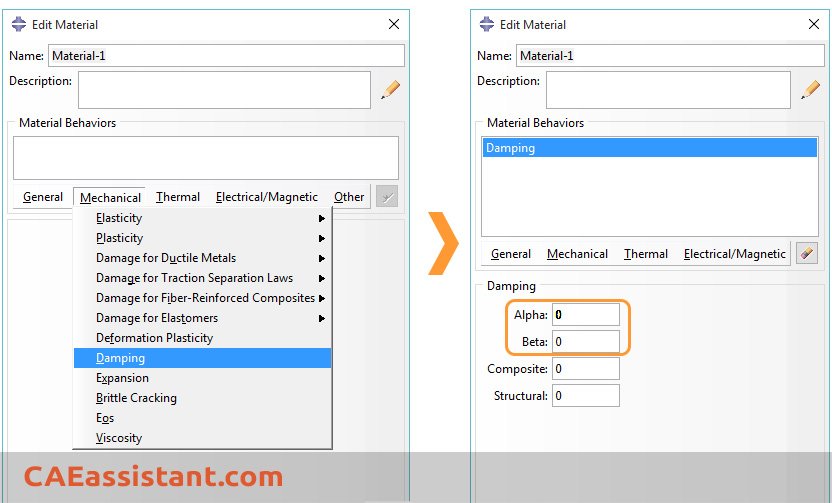 And natural frequency is:

Where c, k and m are damping, stiffness and mass of each mode, respectively.

Assumes that the damping forces are proportional to the forces caused by stressing of the structure and are opposed to the velocity:

Where F and I are the damping force and the forces caused by stressing of the structure for every DOF, respectively. User provide the s value when defining material in Abaqus/CAE: 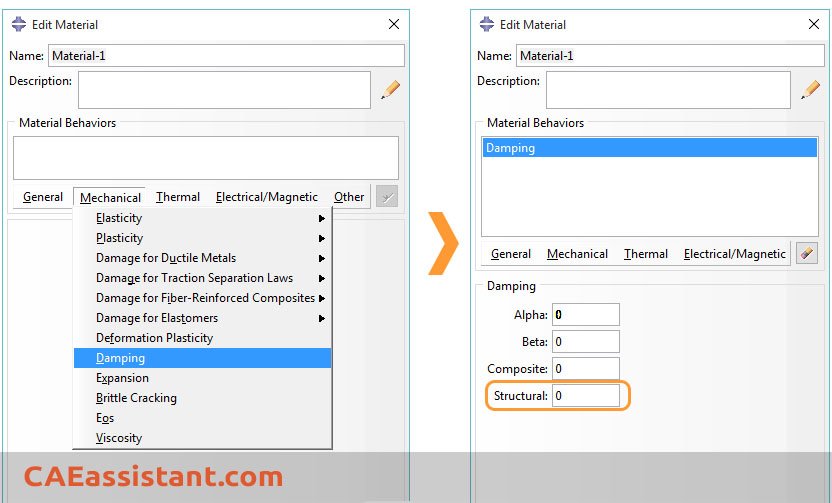 Viscoelasticity is the property of materials that exhibit both viscous and elastic characteristics when undergoing deformation. The term viscous implies that they deform slowly when exposed to an external force. They cannot return to their first configuration. It is due to dissipation of energy. Elastic materials strain when stretched and immediately return to their original state once the stress is removed. Viscoelastic materials have elements of both of these properties:

In Abaqus, the viscoelasticity can be defined as:

Viscoelasticity is a function of time for transient analysis. It describes isotropic rate-dependent material behavior. We can use a Prony series formulation to enter data: 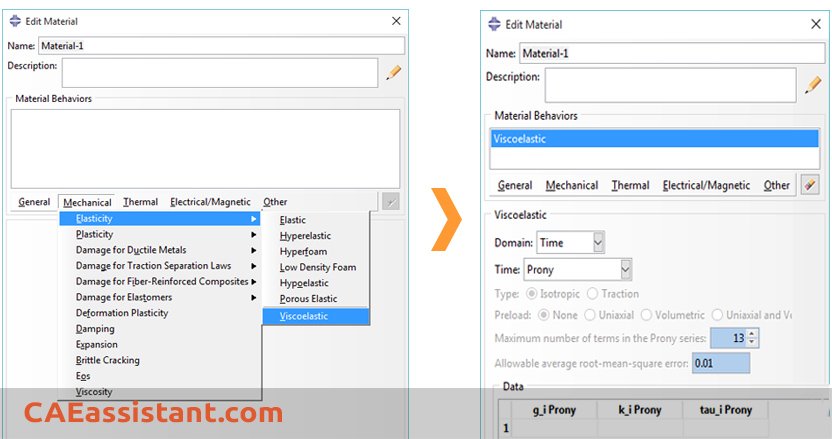 Viscoelasticity is a function of frequency for steady-state small-vibration analyses. This analysis is limited to Abaqus/Standard.

For example, many applications of elastomers involve dynamic loading in the form of steady-state vibration, and often in such cases, the dissipative losses in the material must be modeled to obtain useful results.

For sure, whoever has worked with computers, heard the words "Bug" or "Debugging." Ordinary people may have heard these words in gaming...

END_OF_DOCUMENT_TOKEN_TO_BE_REPLACED

Engineer students, engineer designers, and whoever is working with finite element software, especially the ABAQUS, heard the word "Conv...

END_OF_DOCUMENT_TOKEN_TO_BE_REPLACED

Fortran ‘Must Knows’ for Writing Subroutines in Abaqus (PART II)

In the last blog post, Fortran 'Must Knows' for Writing Subroutines in Abaqus (PART I), we review some of the Fortran basics vital for ...

END_OF_DOCUMENT_TOKEN_TO_BE_REPLACED

Fortran ‘Must Knows’ for Writing Subroutines in Abaqus (PART I)

In Abaqus, user subroutines are primarily written in Fortran, although developing your code in C or C++ is also possible. If ...

END_OF_DOCUMENT_TOKEN_TO_BE_REPLACED

Start Writing Your 1st UMAT for Abaqus (PART A: Foundation)

Here our focus is on UMAT, an advanced subroutine we use to include desired material behavior in simulations. However, the use of this ...

END_OF_DOCUMENT_TOKEN_TO_BE_REPLACED

Start Writing a Subroutine in Abaqus: Basics and Recommendations

The user subroutines in Abaqus allow the program to be customized for particular applications, which are not available through main Aba...

END_OF_DOCUMENT_TOKEN_TO_BE_REPLACED

Sometimes you may need to run several analyses on your Abaqus model. Therefore, you may change some parameters and create diffe...

END_OF_DOCUMENT_TOKEN_TO_BE_REPLACED

Speeding Up Quasi-static Analysis in Abaqus/Explicit (1)

Part 1: Increasing Load Rates We previously discussed differences of Abaqus/Standard and Abaqus/explicit in the article Abaqus/Standa...

END_OF_DOCUMENT_TOKEN_TO_BE_REPLACED

When modeling concrete, in most situation you probably need to define steel reinforcement to follow tensional behaviour of th...

END_OF_DOCUMENT_TOKEN_TO_BE_REPLACED

As you know, we need to link Abaqus and Intel Fortran to execute user subroutines such as VUMAT, UMAT, USDFLD, etc. You can link variou...

END_OF_DOCUMENT_TOKEN_TO_BE_REPLACED

One thought on “Material Damping in Abaqus”