Introduction to ABAQUS tutorials are a series of example-based training videos and in this course as the first step of this series, we’re going to simulate an I-shaped beam with different types of loads and boundary conditions and in static and dynamic methods to compare the results with the theory. Watch Demo

ABAQUS FEA Training package is a series of training videos that are example-based, and in each one, one of the most common examples of engineering is simulated. In this collection, by doing these examples, the user will gradually become familiar with working with ABAQUS and by following these tutorials, the content will gradually become advanced, and the user will acquire the necessary skills for simulating with ABAQUS.

In “ABAQUS FEA Training Package”, as the first step of this series of tutorials, we’re going to simulate an I-shaped beam under different types of loads and boundary conditions to compare the results with the theory,

To do this, we model the beam in the three-dimensional and then wire-shaped form in Dynamic and static methods. At the end of this course, you will be well acquainted with the graphical user interface and working with ABAQUS.

In the previous part, the training process was explained to you; we also had a brief discussion on finite elements and advantages of ABAQUS. In this tutorial, by solving a problem of beams, we move the module to the module, and while explaining each of them, we complete the simulation of the beam together. Then we repeat this for a few more examples.

The beam is one of the most used structures in the field of engineering, whose main task is to withstand the stresses caused by shear and bending anchors due to the loads on it and the weight of the beam itself.

A beam has a very specific meaning in engineering mechanics: it is a component that is designed to support transverse loads, that is, loads that act perpendicular to the longitudinal axis of the beam. This is the main difference between the beam and the truss; The truss is designed to withstand only axial forces. The beams are used in bridges, structures, aerospace, transportation, and so on.

ABAQUS has an extensive element library to provide a powerful set of tools for solving many different beam problems. Beam theory is the one-dimensional approximation of a three-dimensional continuum. The reduction in dimensionality is a direct result of slenderness assumptions; that is, the dimensions of the cross-section are small compared to typical dimensions along the axis of the beam.
It should be mentioned the demo of this package is available on the Youtube Channel. You can find more Abaqus tutorial packages on the website.

Workshop 1: Simulation of Cantilever Beam With Concentrated Force at Its Free End

Workshop 3: Simulation of Cantilever Beam With Concentrated Force at Its Free End Dynamically 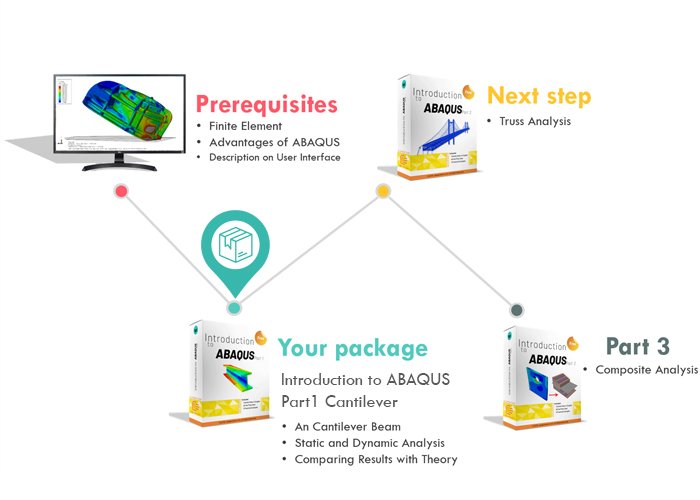